Apple Has a Great Chinese Opportunity

Wanda has emerged as the preeminent company building out a chain of movie theaters in China and acquiring AMC that operates a chain of movie theaters. They built their strategy on the old adage it is about butts in seats. Their success in leveraging their Chinese strategy into a brisk American strategy led them to acquire Legendary – a reliable producer of content. But Legendary isn't capable of producing all of the content required by the AMC/Wanda Pipeline. They still need outside relationships. But other Chinese companies are also rising to fill the gaps.

Independent producers and major studios constantly attract new investment into untested films to fuel the spirit of the entertainment industry in China and America. Franchise films with track records rarely need outside investment. There are lots of players in the world of film finance including government incentives, presales, equity investors and others. Chinese money has become one of the jewels in film finance. For every real investor there are hundreds of pretenders.

I have been sitting on the fringe of a Chinese deal in Hollywood for the past 2 ½ years. There have been contracts signed by multiple investors but the money never seems to move. I also sat with a former CEO of a major agency who arrogantly said to me that he had China wired. When it was time for his announced deal to actually fund there was a blow-up, the funds evaporated, and so did most of his agency. But Chinese deals are too lucrative to ignore so they still get pursued at great cost. What if there was a way to take the movement of funds as an issue off of the table?

Apple may be uniquely situated to facilitate investment funds moving out of China. Apple’s iTunes figures to play a key role in the future of digital platforms. Apple has a continued need for product to fuel this digital platform and they could acquire this product by facilitating investment funds flowing out of China. You see, Apple operates a brisk consumer business in China and they are sitting on lots of RMB at any given moment. That consumer business also is a customer base of screens that can view films - eyeballs on screens. Apple also operates a manufacturing operation in China and they ship billions of dollars every year to fund the production of their phones, tablets, computers, and devices.

Apple and Hollywood already enjoy a close relationship. There are many Apple ties into Pixar that was formerly an Apple affiliate. Apple already gets content from many studios and independent producers for their platform. Apple already has the relationship with the Chinese Government. They sit in a unique position to help facilitate investments flowing into Hollywood to develop and produce Hollywood content. But Apple also sits in a unique position to help China build out their movie industry. They have the strategic positioning and relationships to make this happen. The smart production company negotiating with investors in China would begin reaching out to Apple to forge an alliance. The right relationship with Apple takes the movement of money off of the table on announced deals that face delays and eventually fail to fund. As the business model shifts from butts in seats to eyeballs on screens Apple figures to play a key role. The only question is: Will Wanda get to Apple first?

UPDATE: A few days after this article appeared Apple was banned by the Chinese Government. Their movie and iBook apps have been removed from all of their devices in China. That means a tremendous opportunity for the company in China that gets Chinese Government approval to stream movies and partners with Apple. It will be interesting to watch the developing landscape of Chinese movies.

Presales Using Social Networking Is Next Financing Model For Movies

(This article appeared in the August 8, 2011 edition of the Century City News)

In the film arena preselling seats or content has become a trusted financing mechanism. In the ‘80s we had presales of video, television or foreign rights as a staple of independent film finance. There were many business models introduced that mitigated much of the risk bringing the Studio’s total exposure on any particular film down to less than 15% of the total budget. There were ample rights that brought in attractive revenues if the picture performed at the box office. Many smart producers were able to retain sufficient rights and lay off nearly all of the risk through the pre-sales financing mechanism. 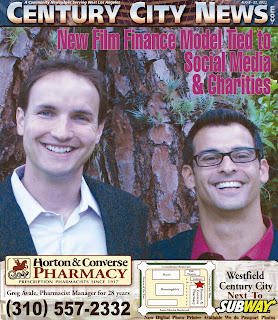 Today many of the sources of this revenue have dissipated. Taking a chance on a film that doesn’t have a track record is a big risk and the number of films that are pushing the creative envelope are few and far between. But the opportunity to leverage social networks to presell a film is virtually untapped. The first to create a successful business model tapping into these social networks are Spero Stamboulis and Brian Ide. Their pre-sales model is taking the risk out of their upcoming feature film, “Mike Mulligan’s Midnight Ride.” They call their business model “ReDistribute” and you can see more at www.weReDistribute.org.

At a time when the Prime Interest Rate is around 3%, and the stock market looks more like a casino; Spero and Brian may have hit the mother lode. Where would you put $25 million today? Where would you put $100 million? These two men can show you how they plan to rewrite the film-financing manual by leveraging existing social networks to bring a film into profit before one single frame of film has ever been exposed. In modern day terms… before a single high-definition video clip has ever been recorded. They do this by aligning the film with hundreds of charities that have a vested interest in the success of the film. They tap into those social networks and spread the word at a fraction of the cost of expensive advertising and reward charities that deliver with a lion’s share of the box office receipts. This is a new concept for breaking an unknown film concept into the stratosphere.

Making movies is so much more about the management of risk than it is about making great movies. We complain about lack of creativity at the box office but nobody can argue with the mitigated risk from remakes or sequels. Complain all you want about “Hangover II” but the numbers speak pretty loudly that this business model is a winner.

Spero and Brian have a movie to finance that may break all of the rules and become the next reinvention of the film finance model. If their financing mechanism works it may bring in a completely different type of investor that has traditionally seen film as too risky a proposition for their core portfolios. In their model they combine social networking, philanthropy, and movie making to bring a family values – historical project to the screen. By preselling tickets through a number of charities they are taking the risk out of their venture and creating a historic based piece that will entertain, educate and give back.

But why not make a donation directly to the charity of your choice? This model counts on people doing what they would already do and making a choice to have a portion of their ticket go to charity. Consider the choice between “Cars XV” and “Mike Mulligan’s Midnight Ride.” Families going to the movies have the opportunity to teach their children that by choosing the Midnight Ride they can give to education and help those less fortunate.

Many “A” list actors are already kicking the tires to see what this might mean to their careers as they attempt to stay on the most prestigious list by also tapping into these important networks. If you operate a medium or large size charity you might want to get on board with their concept because their mechanism might mean millions of dollars to your organization. If you own a distribution company you might want to get on board as this mechanism might become a reliable supplier of “High Concept” content that has ready made profits for investors, distributors and charity partners. If you are on the talent side you might find that their movies are a financial and social opportunity as well as a way to give back. Hilton HHonors has already agreed to support ReDistribute for 2011 and currently American Airlines is taking a closer look. ReDestribute has been selected as one of 50 finalists. They will further narrow their selection by internet vote. You help ReDistribute become one of five charities to win backing of the airline by voting at: https://secure.fly.aa.com/flig htscameraaction/Vote.aspx?vidI D=49 and this can be done once a day from every email account that you have. The contest ends on August 26th.

This concept and the social media revolution are both still in their infancy. We have only seen the beginning of innovations that will come from leveraging our social media networks to drive revenue and mitigate risk. One area that will certainly benefit from tapping into social networking structures is the Motion Picture Industry. These two young and very smart guys might continue to lead the way.

And the concept couldn’t have come at a better time when the resources of governments are stretched to the breaking point and charities are being counted on to fill in the gaps. Movies that make us feel good combined with causes give us that warm and fuzzy feel.

Ten years from now people will be running around Hollywood talking about the big fish that got away. They will all be attempting to book an appointment with Spero and Brian who will be running a studio or two by then…


Michael Douglas Carlin is the director of the movies Luvicide and American Federale. Recently he completed a ten-year stint as the Publisher and Editor of the Century City News. Here his articles turned into three books: Rise a Knight, A Prescription for Peace, and Peaceful Protests.
Posted by Michael Douglas Carlin at 7:52 PM No comments: