Commander Job W. Price should be given the Medal of Honor!!!

If Obama and Hillary are going to tell a lie, lie to make the military look good. Don't trash the career of an American Hero. Commander Job W. Price fought and died for America. He is another casualty of the Clinton Body Count! They made a joke but the military didn't laugh. They leaked false information to the Associated Press about a suicide. Now the record needs to be set straight. Commander Job W. Price, you are not forgotten!!!!

Commander Job W. Price was involved in a plane crash in Iran with Secretary of State Hillary Clinton. He was killed as a result of injuries he sustained in that crash. There is ample evidence that this did, in fact, occur including a Hillary Clinton email released by Wikileaks.

The government covered-up this death by leaking through an anonymous source to the Associated Press that Commander Price was killed by a wound from an apparent suicide. They trashed an American Hero to cover-up dirty deeds. Commander Job W. Price should receive the Medal of Honor for his valor in protecting Secretary of State Hillary Clinton when he flew into Iran, a hostile country for any American Military Man especially a decorated Navy Seal who twice was awarded the Bronze Star.

December 11, 2011 - DEBKA reports that Iran is driving a hard bargain for access to the US stealth drone RQ-170 it captured undamaged last week. Russian and Chinese military teams arrived for a look at the secret aircraft.

December 1 - 7, 2012 - Israeli Intelligence pegs this as range of dates for plane crash in Iraq. They cite the incident as occurring the first week of December, 2012. According to the report Clinton was flying in a C-12 Huron. The plane landed in Avaz, Iran at Ahwaz International Airport. President Ahmadinejad landed at the airport just minutes prior to the landing of the Huron on an unscheduled visit. Since neither US or Iranian warplanes were scrambled it is clear that this was a (wink wink) "scheduled visit." Incursions by US Planes into Iranian airspace are not taken lightly. "According to US Military flight logs, recorded by Russian air and space forces confirm that Commander Price, and other members of US Navy Seal Team 4, left their base in Uruzgan Province, Afghanistan on a flight to US Naval Support Activity Bahrain where they met with Secretary Clinton and all of them transferred to the C-12 Huron that began a flight path to Baghdad, Iraq." DEBKA reports, ""Although our sources have not identified the negotiators on either side of the table, one of the theories floating around certain capitals claimed that Hillary Clinton three weeks ago was on her way to a secret meeting with President Mahmoud Ahmadinejad in regard to those negotiations. The plane carrying her from Bahrain logged its destination as Baghdad, but is described as having changed direction in midair and headed for Ahvaz, capital of the south Iranian province of Khuzestan. There, it was said, the Iranian president was awaiting her arrival. But then the plane ran into technical trouble and made an emergency landing and that was when she was injured, according to this theory. The unexplained death of Commander Job Price, 42, SEALs commander in Afghanistan is [also] tied by some of the speculation to that incident."
Iranian television also confirmed the plane crash with sketchy details.

December 6th 2012  – Hillary Clinton cancels friends of Syrian Forum saying she has the flu. This could have been a political move to dodge a group not aligned with Iran, setting the stage for the meeting in Iran.

December 8th, 2012 - My best guess from all of the intel I have examined as the date of the crash. Clinton was seen in public on the 7th and she could have flown directly from Ireland to the Middle East. On the 9th there are already reports about Clinton's illness.

December 9th – Hillary Clinton is said to have a stomach bug.

December 10 – State department announces that Hillary Clinton has sustained a concussion after fainting due to dehydration earlier in the week and will be unable to testify at Benghazi hearing. "She has been recovering at home and will continue to be monitored regularly by her doctors. At their recommendation, she will continue to work from home next week, staying in regular contact with Department and other officials." - State Department Release.

December 12, 2012 – According to State Department – “Secretary Clinton has no public events.”

December 13, 2012 – According to State Department – “Secretary Clinton has no public events.”

December 14, 2012 – According to State Department – “Secretary Clinton has no public events.”

December 17, 2012 – According to State Department – “Secretary Clinton has no public events.”

December 18, 2012 – According to State Department – “Secretary Clinton has no public events.”

December 19, 2012 – According to State Department – “Secretary Clinton has no public events.”

December 20, 2012 – According to State Department – “Secretary Clinton has no public events.”

December 21, 2012 – According to State Department – “Secretary Clinton has no public events.” 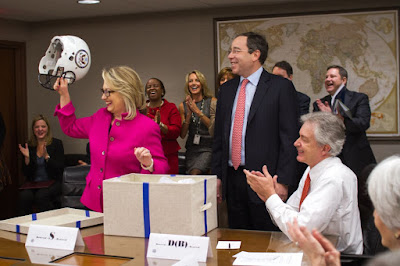 December 21 – Rumors intensify that Clinton was involved in a plane crash in Iran. Obama nominates Senator John Kerry to replace Hillary Clinton as Secretary of State.

December 22 – Death of Commander Job Price is officially reported by Pentagon. The Naval Special Warfare Group Two issued the statement and said that “Price died of non-combat related injuries while supporting stability operations.” Associated Press then quoting an anonymous source reports the death “appears to be the result of suicide.” John Armato, Director of Community Relations for the Pottstown School District and dear friend of Price said, “Job understood the importance of placing the greater good above self and dedicated his career to helping to ensure our freedoms. Our country has lost a leader, dedicated patriot, true American hero and protector of our freedoms.”

December 28, 2012 - Mainstream media reports that Clinton will be returning to work this week after suffering a bout of the flu and a concussion, but Clinton does not return to work.

December 29, 2012 when a follow-up exam for her concussion found she had a blood clot of her right transverse venous sinus.

December 30 – Nasser Karimi (AP) reports that a small American plane left Iran Sunday after it was repaired following an emergency landing earlier this month. Three passengers left Iran for Arab countries in the Gulf. Reuters also reported that a plane had been stuck in Iran after making an emergency landing according to Iran’s Airports Director, Mahmoud Rasoulinejad. They list the plane as a Falcon 900 Executive Jet. Press TV of Iran reported, quoting Mahmoud Rasoulinejad, “The 3-member plane faced technical problems while passing over Iran’s airspace and this is the reason that the airport permitted it to make a landing.”

December 31 – US State Department denies report in EU Times stating that “Secretary of State Clinton was not injured or involved in a plane crash.”

December 31, 2012 - Hillary Clinton is admitted to the New York Presbyterian Hospital with a blood clot caused by a concussion. The hospital reported that Clinton was being treated with anticoagulants and her condition would be assessed in 48 hours. NBC's Robert Bazell reported, "Either it's not really related to the concussion and she's got a blood clot in her leg or something, or there's something else going on that we're not being told." Chelsea Clinton leaves the hospital visibly distraught.

January 7, 2013 – Hillary Clinton comes back to work and receives a football helmet. Clinton was greeted with a box, “inside was a football helmet with a State Department seal, lots of good padding, and also a football jersey that said Clinton on the back.” – Victory Nuland

February 6th, 2013 - Press briefing of Jen Psaki. The tape is altered. 8 minutes is missing on the posted video tape. Someone has been told to bury the deleted tape and to replace it with a flash.

December 2, 2013 - at a State Department press briefing Victoria Nuland is asked if we were in secret negotiations with Iran. She categorically denies this.

May 10, 2016 - Matthew Lee asks, “Is it the policy of the State Department , where the preservation or the secrecy of secret negotiations is concerned, to lie in order to achieve that goal.”
Jen Psaki replies, “There are times where diplomacy needs privacy in order to progress. This is a good example of that.”

Here is a summary of the missing video:

Posted by Michael Douglas Carlin at 9:52 PM No comments: