FACTS BEHIND THE MURDER OF TUPAC SHAKUR

THE CRIME:
On September 7th, 1996 Suge Knight was driving a BMW in Las Vegas with Tupac Shakur in the passenger seat. A White Cadillac pulled alongside the car and 13 bullets were fired all over the car. Tupac Shakur was struck multiple times and a bullet lodged in his lung. Tupac Shakur died on September 13, 1996 from wounds sustained from the crime.

JURISDICTION:
The shooting occurred in Las Vegas. Las Vegas is the assumed jurisdiction.

If there was a conspiracy to kill Tupac then the jurisdiction is where the conspiracy began.

Death Row Records was headquartered in Los Angeles, County so if the conspiracy occurred in LA County then Los Angeles Police, Sheriffs, and the DA’s office have clear jurisdiction.

Evidence examined includes: the records from the Tupac and Biggie LAPD investigation; the Death Row Records Bankruptcy Filings; the Christopher Wallace Estate's civil trial against the City of Los Angeles for wrongful death; secret tape recordings made by bodyguard Frank Alexander in the immediate aftermath of the Shakur shooting; FBI Released Files; various other files, audio and video recordings; and a confession letter written in 1998 that was given to Fox 11 journalist Chris Blatchford.

1.     Reggie Wright disarmed all security guards on the night of the shooting. This was a break from the normal protocol when guarding artists in Las Vegas.
2.     Michael Moore refused the order and insisted on carrying his weapon. He was removed from guarding Tupac Shakur and was ordered to Club 662 where he was to stay close to Reggie Wright. 3.     Michael Moore spoke of standing next to Reggie Wright in front of Club 662 at the time of the shooting and hearing “Got ‘em” coming over the radio. A radio is significant because it implies that there were spotters as well as shooters. This also makes this just like the Biggie Smalls Murder. (See below - Listen especially from 3:40 on).

22. Tupac made it clear in New York, four days before his murder, that he was leaving Death Row Records.
23. Evidence of theft of Tupac's money emerges months after Tupac's murder as Tupac's mother, Afeni Shakur, begins digging into Tupac's business affairs.
24. Michael Harris was beginning to send thugs to visit Suge requesting repayment of original investment and profits from the record label. Suge's inner circle was turning them away.
25. Waymond Anderson says that Michael and Lydia Harris were part of a plot to overthrow Death Row Records at the time that Tupac Shakur was killed.
26. Sharitha would have inherited Suge Knight's shares in Death Row Records. At the time Death Row Records was worth as much as $500 Million.
27. FBI, ATF, and LAPD were all investigating Death Row Records at the time of Tupac Murder and the attempt on Suge Knight. Those investigations would have probably stopped if Suge Knight was killed leaving Sharitha and Reggie to run the record label without interference.
28. Sharitha Knight was dating Officer Kevin Gaines at the time of Tupac's murder. Snoop was on trial for murder that same year. Snoop was acquitted when evidence disappeared from an evidence locker at LAPD that Gaines had access to and he was a suspect in the theft of that evidence. Gaines was also in Las Vegas on "Special Assignment" with other officers on the night Tupac and Suge were shot. (See the document below). Gaines was gunned down by officer Frank Lygga who later said the murder was a sanctioned hit ordered by LAPD brass specifically Police Chief Bernard Parks. Lygga recanted this statement. On the recorded tape at the Police Academy, "He says that Douglas asked if it was an accident to which Lyga replied "no it wasn't an accident."
29. Sharitha Knight was Snoop Dogg's manager at time of Murder. Snoop began the narrative that Suge was responsible for Tupac’s murder. Snoop told Sheriff's that Suge Knight was responsible for Tupac's murder to throw investigators off of trail. This incident happened at the Universal Amphitheater on May 14th, 1998. (See the report below). Snoop said that his security detail ditched him and Sheriffs say that he was approached by gang members affiliated with Death Row Records (Bloods) that meant to do him harm. They saved him from that harm and he told them that Suge was responsible for Tupac's murder. Many investigators have cited Suge Knight for being uncooperative but in the interview for the Biggie & Tupac Documentary Suge is candid about Snoop without mentioning him by name. The Death Row Records website broadcasts a message to Snoop, "2001 The Year of Fear, All Doggs Run & Hide, Suge is coming home." Watch the documentary on YouTube from 1:37:00 to 1:42:02.(https://www.youtube.com/watch?v=GX_rM1Uwo9o) Detective Arnwine, who worked undercover for Long Beach Police while he was assigned to an FBI Taskforce - he said, "Suge Knight used to slap Snoop Dogg around like he was a little girl."
He rode back on the plane and constantly asked Tupac if he was going to Las Vegas. http://uproxx.com/smokingsection/2013/05/snoop-dogg-talks-tupac-beef/
https://escobar300.wordpress.com/2013/02/19/classic-snoop-dogg-interview-disses-ja-rule-talks-about-east-coast-biting-the-west-2pac-punking-nas-etc-speaks-on-nastupac/
Snoop said, "We start a coalition. And we get rid of Suge Knight No. 1 (snaps his fingers) for good, because that’s a bump in the road and when you got a negative bump in the road it makes it hard." http://allhiphop.com/2004/06/03/snoop-dogg-the-realest-part-i/

MOTIVE:
Theft of Tupac's money and music as well as the control of Death Row Records was the major motive. Both Tupac Shakur and Suge Knight were in the crosshairs that night. Keep in mind that Death Row Records was worth over 500 million dollars at the time and Tupac had unreleased but completed songs in the vault that were worth an additional couple of hundred million dollars. Donald Smith aka Lil' Half Dead had the additional motive of the theft of his music by Tupac Shakur and had recently had his contract sold to Priority Records by Suge Knight. Danny Patton was paid $100,000 for the murder.

SUSPECTS:
Donald Smith aka Lil' Half Dead was the alleged triggerman on September 7th, 1996 responsible for killing Tupac Shakur. Smith is the cousin of Calvin Broadus aka Snoop Dogg. Smith was represented by Suge Knight and Death Row Records and his contract was sold off to Priority Records. He had given a demo tape to Tupac and two of his songs were stolen by Tupac according to the confession letter. Theft in the Hip-Hop world was a common practice at that time. Smith is affiliated with the Long Beach Crips. Snoop Dogg, Donald Smith's cousin, tells Sheriff's deputies on May 14, 1998 that Suge Knight was behind the murder of rapper Tupac Shakur. Was this to throw law enforcement off the trail of his cousin? When you look at the cover of "Dead Serious," by Lil' Half Dead, there is a picture of a murdered Tupac at Can-Am Studios. From this interview you can see that Half Dead is Snoop's enforcer: (especially check out the closing paragraph) https://escobar300.wordpress.com/2013/02/19/classic-snoop-dogg-interview-disses-ja-rule-talks-about-east-coast-biting-the-west-2pac-punking-nas-etc-speaks-on-nastupac/

Malcolm Patton was the shooter that was supposed to take out Suge Knight. He shot twice and missed his target. He spoke to Chris Blatchford over the telephone and offered to provide him with details about guns, shooters, clothes, cars, and routes.

Danny Patton aka Whiteboy was allegedly paid $100,000 for the hit in the form of a cashier's check. Danny's gun jammed. Danny Patton is a Leuder's Park Piru Blood.

Reggie Wright Jr. allegedly attended the gang summit and paid the $100,000 bounty to Danny Patton. Reggie was responsible for disarming all of Tupac's bodyguards that night. He also attended every single meeting between witnesses and the Las Vegas Police. Reggie Wright Jr. worked previously for the Compton Jail and then the Compton Police. His father, Reggie Wright Sr. was in charge of the gang unit inside of Compton Police and was absorbed by the Sheriff's Department when it was learned that corruption existed within Compton PD. LAPD's Detective Fred Miller stated that Reggie Wright Jr. was known to control the drug trade in Compton. Reggie was also known to rob drug dealers of their drugs and money instead of busting them. He left the Compton Police on a worker's comp claim. Kevin Hackie claims he handed the weapon used in the Tupac killing to Reggie Wright two weeks before the killing. Hackie claims that the weapon had been ballistics tested a month before the killing and that ballistics test matched the ballistics of the Tupac Shakur murder. Reggie was at Club 662 at the time of the shooting. Michael Moore, a Tupac bodyguard, was next to Reggie Wright when the shooting happened and heard "Got 'em" coming over Reggie Wright's radio. He then heard someone he describes as "white" say, "don't say nothin' over the radio." "Got 'em" probably referred to Suge Knight and Tupac Shakur at the time of the shooting because with 13 bullets launched they really thought they "Got 'em." We have a tape of one of the security guards that worked for Reggie Wright Jr. stating that he had turned to the dark side and had the red carpet installed in his office indicating that he had accepted membership into the Bloods gang. The confession letter places Reggie Wright at the gang summit asking directly for permission to kill both Tupac Shakur and Suge Knight. The confession letter was given to LAPD and instead of being investigated it was leaked by a cop with direct ties back to Reggie Wright Jr.

Sharitha Knight was estranged from Suge Knight and was dating LAPD Officer Kevin Gaines at the time of Tupac's death. Kevin Gaines was killed by Officer Frank Lygga on March 18th 1997. Sharitha was the manager of Snoop Dogg. Snoop Dogg's trial for murder centered around evidence that disappeared from the LAPD evidence locker at the precinct that Kevin Gaines had access to. Sharitha would have inherited the shares of Death Row Records if Suge Knight had been killed on September 7th, 1996. One of our rapper followers reached out a month ago via Twitter and said that Snoop was warned by Sharitha not to come to Las Vegas that night. Snoop also asked Tupac over and over on September 4th, 1996 if he was attending the event in Las Vegas. Chris Blatchford says the shooters said Sharitha was behind the murder of Tupac Shakur and attempt on Suge Knight's life on September 7th 1996. While being managed by Sharitha Knight, Snoop tells Sheriff's deputies on May 1, 1998 that Suge Knight was behind the murder of rapper Tupac Shakur.

David Kenner was the attorney of record for Death Row Records, Suge Knight's attorney, Tupac's Attorney until he was fired August 27th, 1996 just days prior to Tupac being shot. Kenner was also Snoop Dogg's attorney who pulled a miracle defense when the evidence disappeared from the LAPD evidence locker. If Kenner was involved in the murder of Tupac and attempted murder of Suge Knight on September 7th, 1996 he would be representing Suge Knight currently with a severe conflict of interest. It could be that he is now reunited with Suge Knight to protect his own interests by steering any investigation into the murder of Tupac and attempted murder on Suge Knight. Kenner was the person that rented the home from Frank Longo that was owned by Larry Longo from the D.A.'s office. Kenner moved Suge into that house and caused a dime to be dropped on Suge. That conflict of interest was reported in the Los Angeles Times causing embarrassment to the D.A.'s office. David Kenner's representation of Tupac Shakur was a direct conflict of interest to his representation of Suge Knight and Death Row Records. Kenner could have faced disbarment for this conflict of interest if Tupac Shakur had lived. 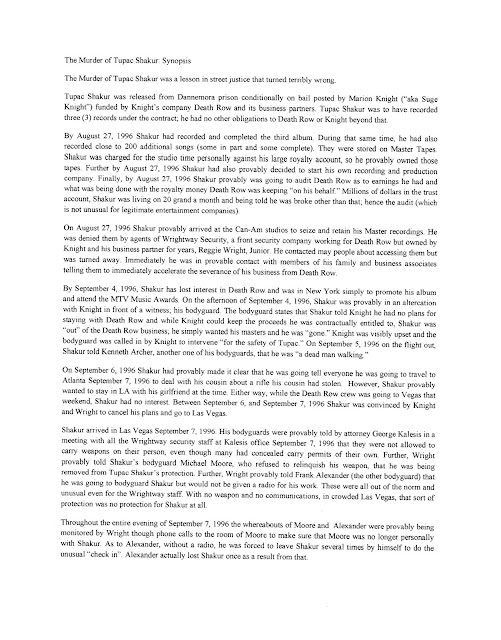 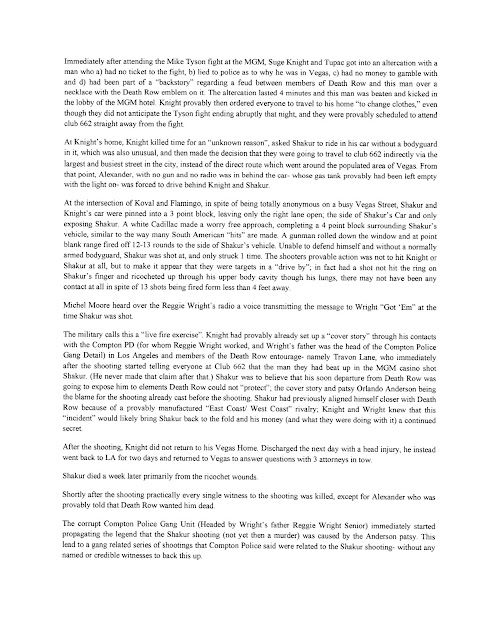 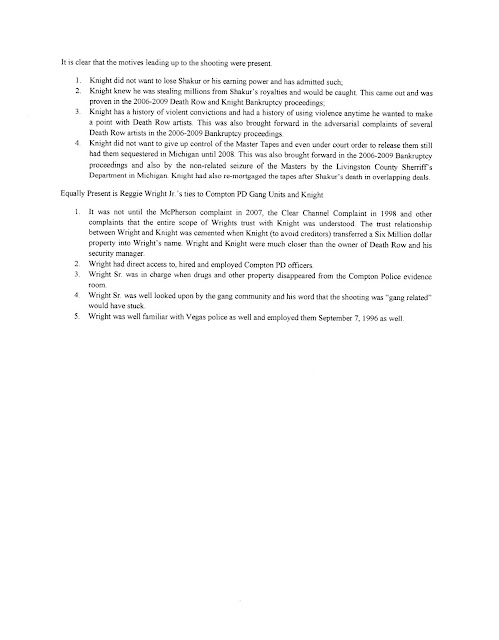 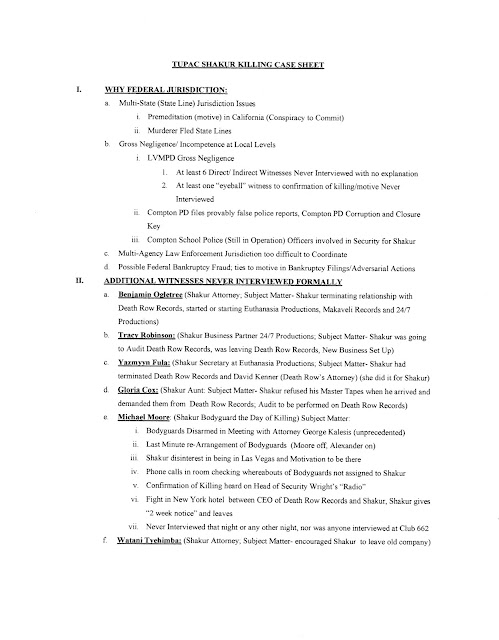 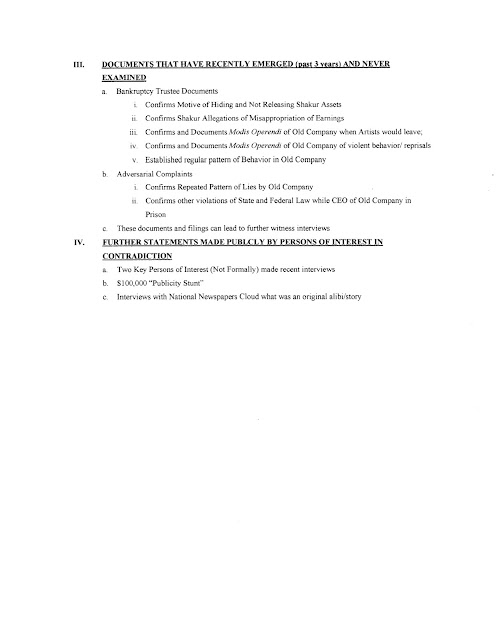 Posted by Michael Douglas Carlin at 12:19 AM 3 comments: